The narrative of having either of the two types of partners is gradually making room for the third category. The rich and faithful. The intelligent and handsome. And then the homely and help-mate.

In case you haven’t heard, those have been some of the overriding comments from most Nigerian ladies who have seen clips or pictures of Serena Williams’ multimillionaire husband, Alexis Ohanian, play the Daddy role and babysit their Child, as his wife returned to court after putting to bed.And this has formed their mantra for 2018 relationship goals and has touched the fanbase of so many diverse opinions.

In the past few days, my social media space has been flooded with women who hold these provocative views that Nigerian men, especially the wealthy ones, would never do such. Rather, they’ll employ a nanny- since their only area of domestic specialty is pinning the woman down during sex.

While this isn’t completely dismissive of the allegations, nature has made it that there are jobs that are masculine, and other chores are feminine. That’s not to say either sex cannot excel in the role.

Being a banker, weekends are usually the only days I have to myself. Hence, I prepare my ”egusi” soup just the way I want it. I integrate my stock fish, fresh fish and assorted meats into my medium sized pot and allow them sort themselves out with the melon seeds and vegetables. As an only child growing up, I honed this skill in the early 2000s under my mum.

When bae visits sometimes, she lavishes praise on my cooking. Sometimes, a day before her visit, she puts a call across pleading that I prepare this special delicacy for her.

While I am appreciative of her preferring Anthony’s ”buka” to KFC, I had mentioned I wouldn’t still be doing this when we eventually settle down as partners.

I’m sure more slay queens will criticize this decision but in truth, when it comes to giving her my love and attention, no one beats my generosity.

On several occasions, when mechanics are not around, I’ve had to assist female colleagues change the tyres of their cars while asking them to step aside. I feel awfully guilty watching a woman do this.

Sadly, most women have turned blind eyes to the things that are happening right. They are just generally negative in their approval of Nigerian men because they believe the good men specie are on the brink of extinction.

Ideally, a man as the head of the family should provide the basic needs and support mechanism for the home. This include, but not limited to rent payment, utilities and other miscellaneous. The woman on the other hand takes care of maintaining a welcoming ambiance in the house, cleaning, cooking and a few others.

Nothing stops her from assisting the man with some of the other responsibilities if she has the financial capacity to do so, and vice versa.

Alexis Ohanian did the right thing. He allowed his humanity and selfless love shine through. If you’re not constantly thinking of what to give in a relationship, be it financial or moral support, it means you’re either not sensitive, you are stupid, or you are not even human. You don’t even love.

If your ego prevents you from helping out with chores, especially when your spouse is indisposed, then your exposure is painfully, useless. 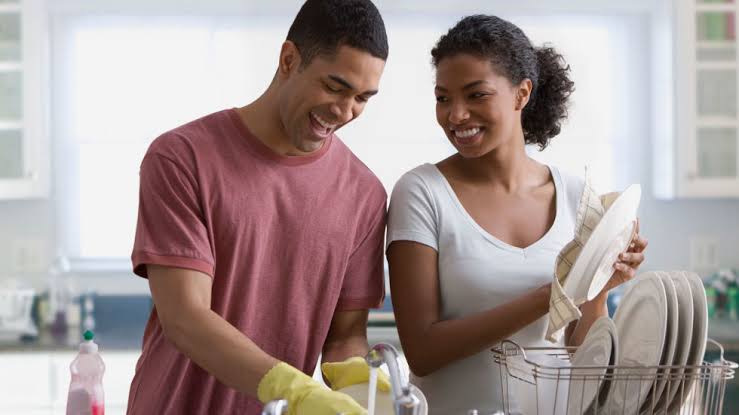 Occasionally, I can prepare the special “egusi” delicacy as a treat to bae, but expectations should be lowered. Men are men, and women are women. Nature assigns each a special task.

If you assemble the best of female footballers around the globe and pit them against a Kano Pillars team, they will get trounced no doubt. Nature has made it that way.

Women are more patient, better organizers and negotiators when they go to the market to purchase food items. Unless a man feels like assisting his partner, it shouldn’t be his core duty every Saturday afternoon. Nature has made it so.

Overtime we’ve seen women running successful businesses, heading organizations and doing great things. A popular maxim in this part of the world has it that behind every glowing wife is a husband doing his job. It doesn’t necessarily have to be babysitting, going to the market or preparing the kids for school.

It could be his attention, his late nights with you trying to analyse your business challenges and advise on better ways to sell.
The illusions that men should also do what women do and vice versa is the problem militating most relationships. Whoever said Nigerian men are not romantic and caring, should have a rethink.

To keep everyone happy though, a set-up is required.
I’d love to hear your thoughts on this too. Are Nigerian men just being misunderstood? Or what should they do to increase their ratings?

19 thoughts on “The Misconceptions of Gender Equality”