Once you taste love that satisfies the deepest hunger you’ve ever known, you’ll never be one who is easily tempted by snacks- Alfa.

Minister: For better for worse

Bride: (Responds) For better for worse

Minister: For richer and poorer

Bride: (Responds) For richer and richer

Guests: (Wild cheer. Obviously, that line of a vow- they haven’t heard before)

This was what played out in a video clip I watched a few days ago.

Marital vows are very similar across denominations. Usually, the officiating Minister reads out the vow, while the Groom/Bride echoes the words. For once, the said clip is quite different. I can’t think of a better way to dissolve” negativity”, and in a way, her vow sort of gives the world a glimpse of the wife she will be.

I put up the video on my WhatsApp Status story with the question, “What do you make of her vow?” “Well, it’s a positive declaration”, a friend responded after watching. Although, his view was met with more nods than nays from the comments afterwards, so many respondents were of the opinion that her vow puts pressure on the husband, and indirectly sends a signal that she might not withstand a situation of lack.

A friend in particular, buttress that the Bride wants a life full of merriment. Another said the Bride wants to enjoy all the pleasures that marriage could offer.” She’s not being realistic, she’s greedy “, these were the invectives from another respondent.

In all honesty, the fifteen-second video clip contained a lot of talking points. And I couldn’t help but share my thought.

You see, knowing that you have such a friend or spouse should make life easier. In this case, nothing beats the feeling- to have the trust of your spouse. She could see your intellectual blueprint, and that you’ll be so successful- such that ‘poverty’ will be an alien language. You wake up each morning to the peaceful rising of the sun, confident that someone believes in you. Instantly, you can feel the “push” and all the other problems around you would seem to disappear into thin air.

So many of us need that Trust!

Many months ago, when I started this blog, I only needed an outlet to discuss issues on relationships. After my first two articles here, bae started calling me an “author”. It was the first time anyone would address me as such, despite the years gone by when I felt I could write.

I remember fondly, a gathering with her friends where she beckoned on me to join them. Well, who wouldn’t miss a husband material after our brief issues? On getting there, I noticed that my antecedent as a blogger preceded me. Her friends kept telling me they have been following my blog, and can’t wait to read my book someday.

It’s hard to put into words how that made me feel.

It’s been said that a woman’s greatest perfume is the fragrance of her man’s success. When you have a friend, or spouse who supports you, no matter the capacity he/she serves in, you will live off the memory for a lifetime, and rightly so. Such people make colours a little brighter. It’s like adding stew to Jollof rice.

For me, the Bride is an example of what a spouse should be. These days, this sort of confidence reposed in another is not common to find. Her vow should set precedent. Get you a friend, a spouse whose watch word is “positivity”.

Not those who can hardly call your name above a whisper because you are still struggling. My thoughts! What’s yours? 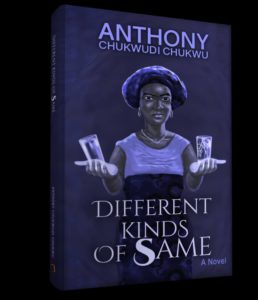 P.S: My debut novel, “Different Kinds of Same” will go on sale on the 18th of August, 2018. It’s a gripping and emotional story on love and Sickle Cell Disorder. Shoot me a mail on Centanthony90@gmail.com for directions on how to get a copy.

5 thoughts on “Who Is Your Biggest Fan?”